Let’s get this out of the way: the mystery of this case is not that it is unsolved. It is, in fact, a “solved” case. Joseph Finkel was identified by multiple witnesses and convicted by a jury on January 29, 1944, on multiple charges of rape, attempted rape, assault, and burglary.  The San Francisco Examiner and Chronicle newspapers have multiple articles documenting the indictment, trial, and sentencing of Finkel.

But there are a few interesting clues that point to a missing cultural narrative surrounding this case and preceding the arrest of Finkel, a shipyard worker from the Bay Area.  And I want to hear more about it. 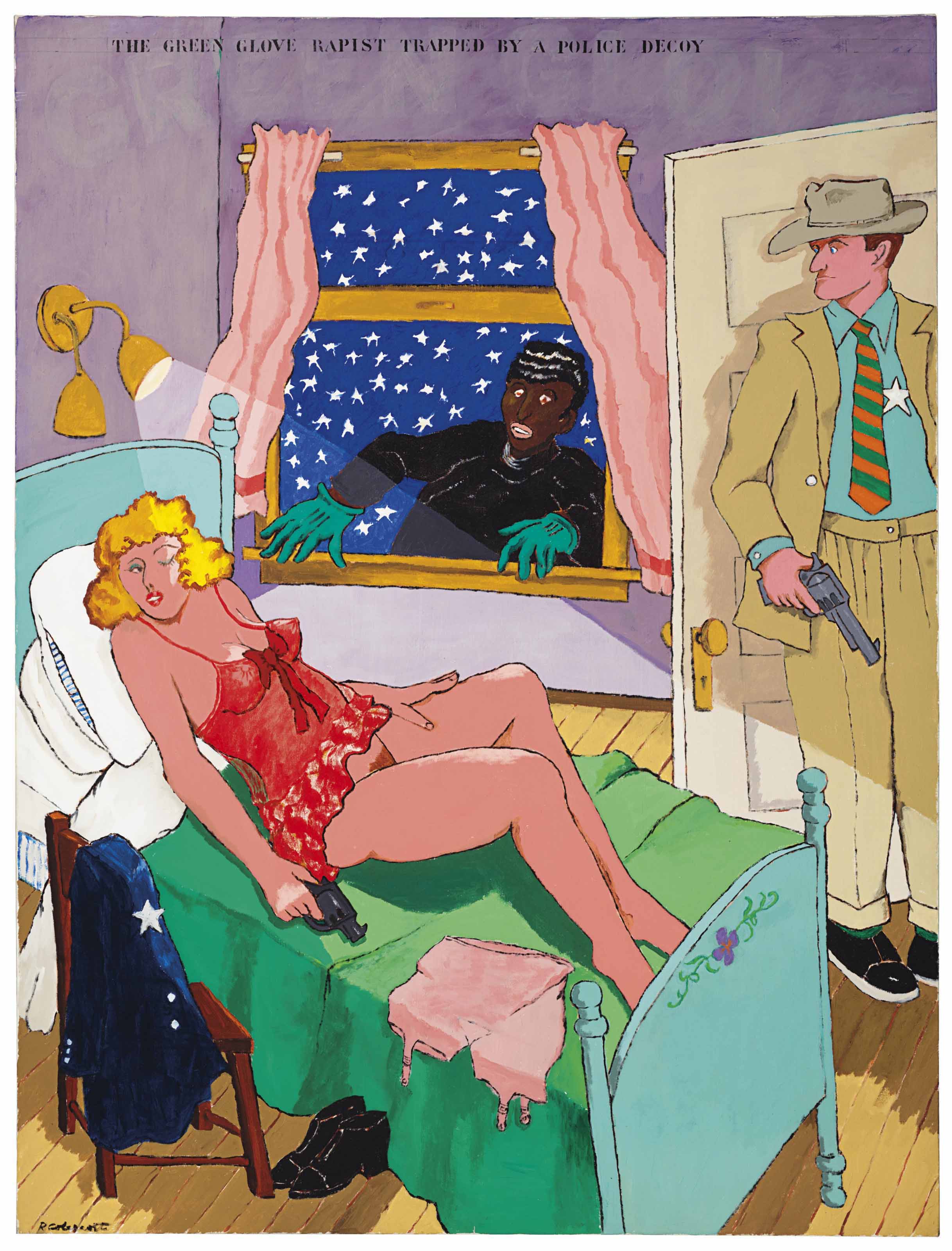 Imbued with both tongue-in-cheek humor and biting criticism, Robert Colescott’s Green Glove Rapist depicts an imagined scene of a sting operation. A scantily-clad vixen, “the police decoy,” feigns sleep with her window wide open, luring the criminal into the trap set by the hiding policeman. The scene reflects a real case in the mid-1940s, when an allegedly black serial rapist wearing green gloves was ravaging the city of San Francisco.  The media launched a full anti-black campaign around the situation, at the height of which cops patrolled demographically black areas in search of the perpetrator. After weeks of terrorizing the community and in an almost comic turn of events, the culprit turned out to be a white man. Colescott grew up in the Bay Area and would have been in his early 20s at the time of the case. In Green Glove Rapist, Colescott depicts the scene as the media and public saw it, rather than portraying the actual white culprit. In so doing, Colescott underscores the problematic association between crime and the black community in America.  As Colescott quipped, “to make a statement about white perceptions of black people by redoing a stereotype, who ever thought such a thing could happen?” (Colescott quoted in Holland Cotter, “Unrepentant Offender of Almost Everyone,” New York Times, 1997, H35). Colescott’s paintings illuminate the stereotypical values associated with race through his unique brand of humor, sparking conversations about race and identity that remain prescient and necessary in our current world.

“Defendant was charged in thirteen counts of an indictment with rape, robbery, burglary, and attempt to commit rape in respect to five different women. On a trial to a jury he was acquitted on the charges alleged in counts one to three inclusive and counts eleven to thirteen inclusive. He was convicted on the charges found in counts four, six to ten inclusive, and guilty of the lesser offense of simple assault on the charge of assault with intent to commit rape found in count five. The jury also found that the charge of a prior offense of attempt to commit rape in Honolulu was true. Consecutive sentences were imposed for the various offenses of which he was found guilty and his motion for a new trial was denied. His appeal is from the judgment and the order denying a new trial.”

“The women all identified their attacker as a negro, or as a white man with negro blood or features, or as a Mexican or “foreigner.” However, four of these women picked Finkel in the police line-up and identified his picture beforehand, picking it out of a group of five. The police originally traced him through a laundry mark bearing the initial “F” found torn off of a piece of linen used to bind and gag one of the victims.”

“It was also shown that a fellow prisoner — formerly a barber — had been giving Finkel skin bleaching treatments with a preparation containing Fuller’s earth while the defendant was confined in the county jail awaiting trial. The barber had also cut Finkel’s naturally kinky hair into waves and had shaved his eyebrows, which altered his appearance greatly. This testimony was denied by witnesses for the defense, whose testimony, however, was fully impeached.”

“As we understand the argument of appellant it is that the testimony of all these witnesses was the result of hallucinations, and that it was discredited on cross-examination. He labors the point that some of them at first thought he was a negro or a Mexican, or a white man with some negro blood, and that some said he had a little mustache. Their testimony was corroborated by that of a barber in the county jail detailing treatments he had given appellant before the trial to bleach his face and to alter the cut of his hair and eyebrows. Though appellant testified that he had never worn a mustache the State produced his identification badge and card from the Bethlehem Shipbuilding Company where he was employed during the time when these attacks were made. This picture showed him with a mustache and another employee of the company testified that he wore a mustache while at work during the period in question. All these circumstances bring the issue of identification squarely within the rule that the strength or weakness of the identification is a matter for the determination of the jury.”

Item 4: Archived negatives from the San Francisco Examiner related to the Finkel trial:

The end of the letter reads:

“In the last two years Los Angeles and the Bay Area have really gone
through big changes. Both places are buldging with people. There are more
than 90 thousand Negroes in L.A. and over so thousand in San Francisco,
Oakland & Berkeley. The most acute problem is housing-and I mean
acute. There have not been any serious outbreaks in the Bay Area, but
several tense situations have developed from time to time. The most serious
was last summer when the papers carried on a full-dress anti-Negro
campaign around the “Green Glove Rapist”. A series of eight or nine rape
cases were blamed on an alleged Negro who wore green gloves. At the
height of the campaign a thousand cops roamed the Fillmore district every
night looking for the “Negro rapist.” After weeks of terrorizing the com-
munity there a white man was arrested for the rape cases. He was finally
convicted and sentenced last week.”

TROOP OF AUXILIARY POLICE FROM TARAVAL STATION MARCHING IN REVIEW

The services rendered by the auxiliaries has extended to foot patrol in residential areas and radio car patrol. During the search for the so-called “Green Glove Rapist,” foot patrol in the residential districts was carried on exclusively by the auxiliaries who replaced the regular men of the department engaged in the search for the terrorist. The radio cars in outlying districts are now occupied by a regular man of the department and an auxiliary during the evening hours. This has been most successful and augments the city-wide patrol. The Auxiliary Police have contributed 465,538 man-hours to the people of San Francisco.

This represents the services of 58,192 men performing one eight-hour tour of duty or 195 men working a whole year and being allowed one day off each week and fourteen days vacation. The department, suffering from a man-power shortage and burdened with added responsibilities due to wartime conditions, gratefully acknowledges its debt to the Auxiliary Police.

This is a narrative I would like fleshed out — a book? A film?